Prior to applying any remedies for head lice, you have to be well-concerned about these disgusting insects along with their other belongings like eggs and nits! Let’s find out the real colors of such bad bugs, below-

What are Lice and how do they Look?

A head louse or lice are one kind of parasite that exists in human head and feeds on human blood through their scalp. This creature is known as Pediculus humus Capitis in scientific term. When these parasites are all grown up, they look like the size of a sesame seed, which has six legs and comes in beige to gray shades for the utmost times. Mentionable here that lice seem much darker when they feed and gather enough blood in their stomach! It is also seen that lice frequently appear in the same color as the hair where they have infested.  Remember that learning what a louse look is like will help you how to detect them or prevent their infestation! 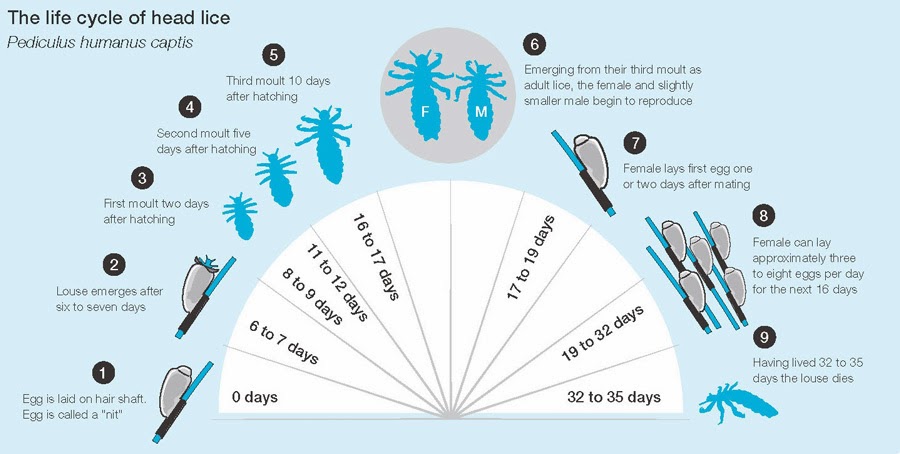 What are Nymphs and Nits?

Lice have three forms among them, nymphs and nits are two primary forms before a louse is turning into the adult condition. Once the lice eggs hatch, they are known as the nymphs, in which they stay in immature condition. In this form, nymphs are seen in the grayish tan shade and with very tiny shape, which gradually increase day by day till the adulthood.

Nits are the eggs of lice from where parasites are already hatched or just going to be hatched. These eggs are appeared to the hair shaft and seem as dandruff or residue from hair packs. This is the most irritating and revolting part of having head lice as these nits not only resemble extremely annoying or nasty inside the hair but, they could embarrass you anytime by displaying on your head in almost every sort of hairstyle! These nits come with one kind of gluey thing which help them to stick in your hair and hard to drag them out from there easily. Only a fine-tooth nit comb could help you in this endeavor.

The life cycle of lice is not stayed for an extended period, especially till the maturity. The lice eggs take 8-9 days for hatching after they are laid by the female lice. Once they are hatched, they take approximately 12 days to form the mature lice from the immature nymphs’ condition. After that period, they mate with the opposite gender, female lice lay their eggs and then, the cycle continues this way again and again!


You may be insterested :