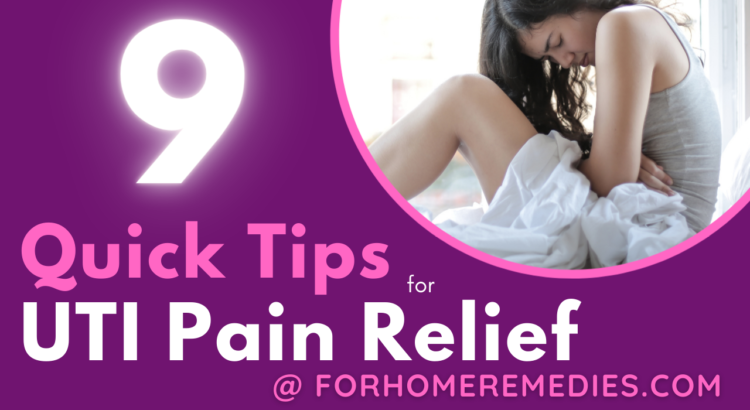 How to get rid of UTI (Easy Home remedies for UTI)

1. How Cranberry Juice helps for UTI

Cranberry has found to be very effective against UTI as they increase the acidity of our urine, which in turn changes the condition of the Urinary tract making the growth and development of bacteria nearly impossible. New studies have shown that few substances present in the cranberries prevent bacteria from attaching themselves to the urinary tract and thus preventing urinary tract infection.

Vinegar has huge amounts of salts like Potassium and various types of enzymes, which retards the growth and development of bacteria that ultimately cause UTI. Thus, people who are suffering from UTI can consume Vinegar by adding it to their normal diet so as to cure UTI effectively.

You can consume fruits and vegetables that are rich source of Vitamin C like Amla. Vitamin C has the property that inhibits and suppresses the growth of bacteria and hence wards off diseases like UTI.

4. Difference between Yeast Infection Vs UTI

Yeast Infection and UTI are common diseases found in women, although they both are very similar with respect to causing pain in the vaginal areas they are characteristically different as the yeast infection is caused by a fungus named Candida Albicans while the UTI is due to bacteria. Also Yeast Infection occurs in vagina while UTI occurs in any part of the urinary tract. Yeast Infection is not as threatening as UTI.

Baking Soda can be used to treat UTI as it has the property to adjust and maintain the acid-base balance of Urine. Baking Soda alleviates the pain associated with UTI and also nullifies the excess acidity present in the urine which further catalyzes the recovery rate.

6. Foods to avoid during UTI

There are certain types of food that must be avoided during UTI as they can further worsen the situation, such foods include sugar and its related products the reason being the eating habits of bacteria. It is known that bacteria feed on Sugars and so if you eat sugary products like Chips, cakes, etc., then the UTI will take a lot of time to heal.
Acidic fruits should also be avoided like grapefruits as these fruits can cause inflammation in the tract and thus worsen the situation. Spicy Food and dairy products should also be avoided.

Garlic is a wonderful ingredient to get rid of UTI, not only being a culinary necessity, it is easily found in every household in most of the house. Garlic has effectively shown to treat UTI even for the people who were not being able to recover from UTI using traditional antibiotics.

There are various ways to combat UTI one of the best methods to get rid of UTI is by drinking juices of various fruits and vegetables. Commonly used ingredients in making juice are Lemon, Blueberries, Cranberries, and Watermelon.

The simplest recipe includes taking half lemon, one and a half blueberries, two cups of watermelon, and a half cup of cranberries. After putting them in a juicer and drink the juice as much as three times a day. It will surely help you to quickly cure UTI. Juices can also be made with the help of herbs such as Yarrow, Garlic and Coriander, etc.

9. Other natural remedies for UTI

The other natural remedies for managing pain caused due to UTI includes heat treatment, for doing the heat treatment you would need a hot towel or heating pad whatever works for you, you have to simply apply the heating pad around the pubic area and it will certainly alleviate your pain. You can also use other types of herbs to treat UTI like Uva Ursi which work effectively in treating UTI.